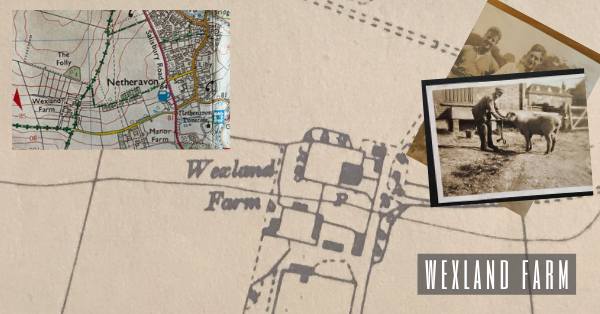 For much of the eighteenth century most of the parish of Netheravon was owned by the Dukes of Beaufort, whose family seat was at Badminton in Gloucestershire. John Howe, created Lord Chedworth in 1741 and also based in Gloucestershire, and his successors also held land here.

A Beaufort Estate map of 1748 shows the extent of cultivation in Netheravon at that date, distinguishing clearly between cultivated land and down. The cultivated land was divided into named common fields and it is clear from the map that each of the fields was subdivided into the strips/parcels which were the building blocks of each individual tenancy. A distinction is also made on the map between the “Inland” and “Outland” parts of the parish. The dividing line is, for the most part, the east/west old Warminster Road. “Inland” lies to the south and “Outland” to the north. 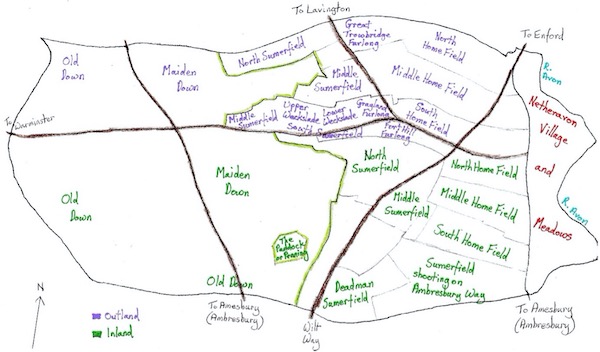 The sketch map  (not to scale) is largely derived from this map of 1748. The names and approximate locations of the common fields are indicated. It is worth noting, in the context of possible origins for the name of the later Wexland Farm, that “Upper Weckslade” and “Lower Weckslade” are named areas of common field north of the Warminster Road. The land holdings of both Manor and Wexland farms have always been largely away from the village.

In 1772 Beaufort possessions in Netheravon were up for sale.

The estate was bought by William Beach, whose son-in-law, Michael Hicks, younger brother of the 7th Baronet of Beverston in Gloucestershire, took the additional name of Beach under a condition of his father-in-law’s will. Job Gibbs, a prosperous gentleman farmer, leased Wexland and various other landholdings in 1780 and also after Enclosure in 1790. William Tuckwell took over Wexland in 1800 but died in 1820, after which his wife ran the farm for seven years.

Thomas Jenner took over the tenancy  of Wexland in 1827/8 as well as the glebe (church) lands. He was the son of Henry Jenner tenant of West Chisenbury Farm, then part of Netheravon parish.  This table gives an idea of how the land was used at Wexland in 1855. 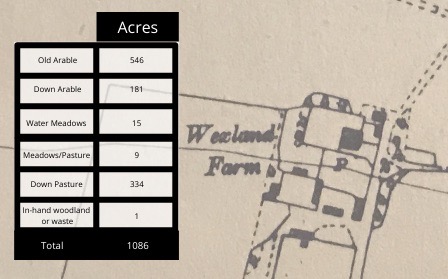 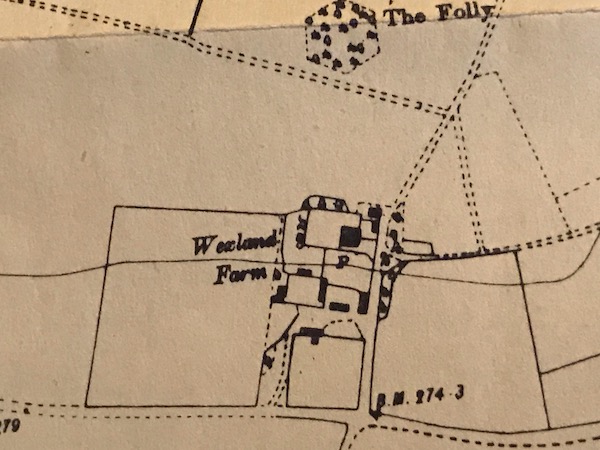 Thomas Jenner was still the tenant of Wexland Farm – aged 68 in the 1851 census. He seems also to have been the nominal tenant of West Chisenbury Farm, where his father had farmed. Thomas was living in Netheravon (presumably in the Wexland farmhouse) in 1851, listed in the 1851 census as a farmer of 1088 acres. The tenancies of both farms were renewed in Thomas Jenner’s name in 1855, along with renewal of the tenancies of the other Netheravon farms. Wexland Farm included 4 cottages – 2 in the village and 2 on the down. Annual rent was £975. Jenner was to keep 1300 summer sheep (650 in winter) on the farm and he was to grow sainfoin on no less than 50 acres and no more than 70.

He died in about 1857 and the Wexland tenancy passed to his nephew, also called Thomas, who is listed as the farmer there in the 1861 census, employing 10 men and 6 boys, and living there with his wife and young family.

The 1871 census continues to show Thomas Jenner at Wexland Farm, employing a larger number of people than in 1861 – 17 men, 7 women and 10 boys. A four year old John Jenner was living with his aunt, widow Fanny Stagg (nee Jenner) at Manor Farm at the time of the 1881 census.

Alfred Rawlins (pronounced locally as Rollunss) farmed at Newfoundland from 1877 and also took on Alton Magna Farm at Figheldean. From 1885 he took on Wexland  Bake and altogether farmed 692 acres until 1892.

The census of 1881 shows a bailiff, John B. Newton, living at Wexland Farm employing 12 men and 9 boys. His detailed accounts  survive including the names of the 13 horses.  There were  8 working oxen but no dairy cattle. John Mortimer  took on the tenancy in 1888 at a much reduced rent. Even so Mortimer had financial difficulties  and the bailiff took over again for a short  time.  Some land was let  to “A Kite & J Fay” from 1894.

Housing which appears like a remnant of the C19th shows up at Wexland in the 1911 census. Farmworker Daniel Cottrell, a single man of 60 lived in one room at “The Barn Jenner’s Farm”.  One Garnet Charles Pearce aged 23 lived in a “dwelling van”, which could have been a Shepherd’s Hut, and looked after the poultry.

The family who now farm at Wexland arrived there in 1931, farming under the name of Bennett Bros. In 1940/41 Bennett Bros were farming both Wexland Farm and Alton Magna Farm, which they took on at the start of 1939.  The acreage of Wexland remained the same as in 1910 but more arable was brought in to cultivation  between the wars.  Local farms took on more “mixed” farming during the C20th: sheep gradually disappeared from the downs and there was an increase in dairy cattle.  Farmers did well who could take advantage of the rough grazing  for cattle at Schedule 3 rents  and the two farms had about 2000 acres of  it between them.

In 1941 Bennett Bros were paying an annual rent of £410 and a total of 8 people were at work on the farms – 5 men (3 of them family members), 2 boys and one woman. There were 4 farm horses and 3 tractors, one of which was for stationary work only, along with 2 oil/petrol engines. The farmhouse and buildings had piped water and electricity.

At the same date they had a dairy herd of 100 cows/heifers and a bull, and 485 sheep. The inspector commented: “Farmhouse in very bad state – has been shored up to prevent collapse”.

After 1918 two houses for army officers  were built on “Wexland Avenue”, followed by several more in the late 1950s/1960s, with a plantation of trees.

With thanks to the Wiltshire Building Record for researching much of this information and to the Bennett family for photographs.