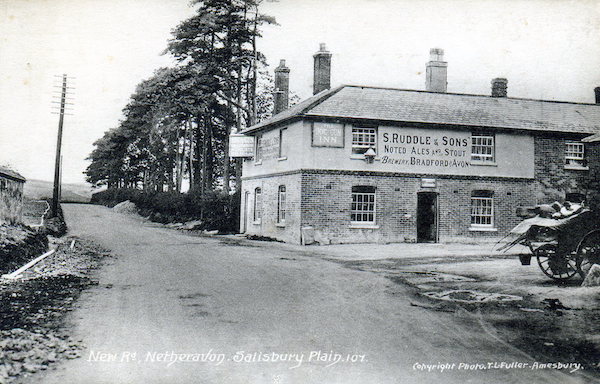 The Dog and Gun Inn

The Dog & Gun Inn opened soon after the new road, “the high road” which bypassed the vilage, was put through by the Kennet and Amesbury Turnpike Trust in 1840

Like many occupations innkeeping tended to stay within the family. Families were usually large and at least one of the numerous children could be expected to follow the profession of his father, helped by younger members.  So, it was with the Dyke family who ran the inn for over fifty years.

David Dyke was born in 1799 at Fairford, Gloucestershire son of John and Anne (nee Trinder) Dyke. He was already a widower in 1831 when he married Mary Cozens by licence at Netheravon.  His occupation then and at the time of the 1841 census was gamekeeper.  By 1851 the family, with five children, were at the Dog and Gun and also running a grocery business.  Their eldest son Robert died in 1860 aged 28, his gravestone is in Netheravon churchyard.

Their next son Joseph was working there as a waiter in 1861, but by 1871 David and Mary’s third son George Trinder Dyke had taken over as innkeeper, brewing his own beer. Two of his eleven children were working as barmen in 1901.

At some stage the Dog and Gun came into the ownership of Usher’s Wiltshire Brewery, based at Trowbridge.  This was possibly after the death of George Trinder Dyke in 1903 aged 64, as he was always described as a “brewer and innkeeper”.  George has a memorial in Netheravon churchyard.

Usher’s Brewery also owned the Fox and Hounds at Netheravon and eventually had over 300 pubs in Wiltshire.  The licensees could expect to move around, and the pubs were no longer run by local people.  The long association of the Dog and Gun with the Dyke family ended in 1903 at a time of great change in Netheravon. The sale from the Hicks Beachs to the War Department in 1898 brought in large numbers of troops, horses, and gradually, motor vehicles.

In 1911 the census return indicates a very different pub to those of earlier years when most of the inhabitants were members of the Dyke family.  None of the residents were local in 1911. The licensee was James Grist and there were eight boarders and lodgers. These were a chauffeur, two carters for a timber merchant, a jockey, and four stable lads involved in horse racing, two of them Irish.

Grist died at Cricklade in 1914 aged only 48 and the Dog and Gun was taken over by another experienced Ushers licensee, Edward James Witchell.

The Witchell family ran the Three Horseshoes pub (now closed) at Chirton from at least the 1870s to the end of the C19th.  In 1911 Edward James (born 1883) and his wife Fanny were at the Poore’s Arms at Charlton (this was formerly the Red Lion, commonly known as the “Cat”, and officially became the Charlton Cat in 1921).  Brought up at the Three Horseshoes, he became licensee of the Dog and Gun sometime after 1911.

The Witchells were still at the Dog and Gun in 1939 with their two sons Peter James and Edward John (Jack). Their father died in 1958, his address then being New Farm, Netheravon.  The brothers Peter and Jack ran the farm until it was amalgamated into Manor Farm.