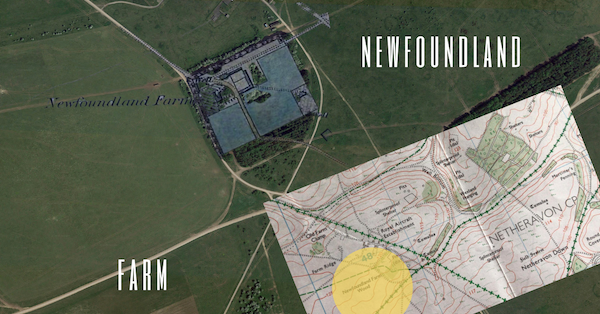 Newfoundland Farm appears to date from the 1830s as a downland farm for the rearing of sheep, probably part of what is now known as Wexland Farm

It was situated at Well Bottom, by Wexland Hanging. It is interesting as there are records in the Gloucester Archives which show that  there were plans  in  1863 to build new farm buildings at a quoted cost  of £884. They were to be “a Cart Horse Stable, Barn, Piggeries, Chaff House, Nag Stable and Coach House”. The builder was to be Benoni Mullings  from Devizes.  The new barn and chaff  house imply that there was to be an increase in arable  land under cultivation.

The instructions are detailed  and include this for the barn:

“…the walls are to be weather boarded externally in yellow pine, painted over “with good tar, to every gallon of tar add half a pint of resin and one knob of quick lime all boiled together and used whilst hot”. The floor is to be supported on sleepers and joists of English oak – the “mows” (raised storage areas of the barn to guard against  rats) to have an elm floor, with oak floor boarding elsewhere, and 4 pairs of sliding doors.”

The stable includes a harness room and evidently adjoins the chaff house, with communicating door. The hay loft above is to have elm floorboards, a hay-drop over the mangers and two pitching doors, one on either side of the building. It is to be reached by a fixed ladder and trap door.  These plans are very similar to buildings existing at Mill (formerly Newton) Farm, also a Hicks Beach farm,  until demolition in 1974.

The area of  land under cultivation in Britain increased  from  the  mid 1850s until the period of agricultural depression towards the end of the century.  Large estate farms brought marginal land into cultivation as well as ploughing up pasture land. The thin  soiled bakelands (or beakes) of Salisbury Plain were part of  this development, and included Newfoundland. Partly due to this expansion, arable farmers had to contend with lower prices, which were also influenced by a series of poor harvests in the late 1870s, and an influx of cheap American grain. In the  ensuing late C19th  agricultural depression many left working on the land, and some emigrated. Much arable reverted to grassland.

Newfoundland was tenanted until 1892 and then farmed in hand by the estate for two years. The farm had by then reverted to grassland and the buildings were converted into training stables.

In  1881 Newfoundland was busy. There lived:

Charles Amor aged 34, a carter, his wife Elizabeth and their four children.George Waite aged 66, the farm manager, and his wife Ann,  their son aged 17, an agricultural labourer and a granddaughter  aged 12.

Thomas Eyres aged 44, an agricultural labourer, his wife Martha and their 7 children. The two eldest sons aged 15 and 13 were employed as carter and plough boy.

The 1891 census  mentions Newfoundland Bake where lived Francis Sheppard aged 45, a shepherd, and his wife Mary Ann. Both she and their daughter Ellen  were agricultural labourers (this was a wide  term) and their  son of 16, also a shepherd. Another daughter was 14.

So within a hundred years Newfoundland had changed from  an area of sheep grazing, then to arable, and then to military training. This pattern was repeated all over Salisbury Plain. There is little or  no trace of any of the field barns, farmyards or cottages which once were scattered all over.

By 1911 there were dozens of soldiers encamped there, mainly field artillery, with officers using the cottages. No trace now remains of the buildings.

Thanks to the Wiltshire Buildings Record for help with this article.