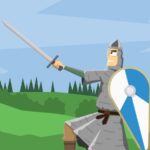 Domesday Book is a survey ordered by William the Conqueror to find out  who owned what and how it had  changed in the   twenty years  since  the Norman Conquest in 1066. It was a way of calculating how much tax could be charged by the Crown.  It was also a great way of  finding out how the land was used, how society was organised and how many people there  were.

Netheravon had a recorded population of 132 households in 1086, which put it in the largest 20% of settlements, and is listed under three owners in Domesday Book. All land ultimately belonged to the King but some of it was held directly from him by tenants-in-chief who were mostly Norman knights. Under them there were Lords who would have been granted the estate in return for tax or military resources (eg a fully equipped  knight on horseback).  The lords in 1086 were noted as King William, Hervey of Wilton, Durand (who was probably a Saxon thane) and Nigel the Doctor.  Nigel held many lands elsewhere including Chisenbury, also in Elstub Hundred, where he had a much larger landholding including a mill.  In 1066 his lands in both settlements had belonged to one Spirtes the Priest.  Netheravon church is described as ruinous in 1086; this may be linked to the absence of Spirtes and the description may not apply to the tower.

Most of the land was arable, with some meadow and pasture mostly for grazing sheep. Villagers’ holdings ranged from 5 to about 30 acres and the land was ploughed by oxen in teams of eight. There were three mills. Commonly about 10% of the community would be slaves, who belonged to the lord and could be used as ploughmen.  There were 46 slaves in Netheravon.

Any cookies that may not be particularly necessary for the website to function and is used specifically to collect user personal data via analytics, ads, other embedded contents are termed as non-necessary cookies. It is mandatory to procure user consent prior to running these cookies on your website.