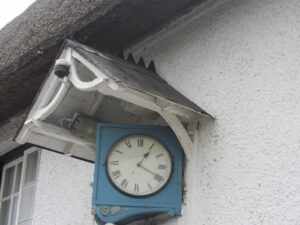 The clock was put up to celebrate the Diamond Jubilee of Queen Victoria in 1897, above the door of what was then the village Post Office.

It may have   been made locally as it was wound up every week by George Sheppard, clockmaker, who lived at Lower End by the Smithy.   A ladder was kept in the garden for that purpose of just the right length. 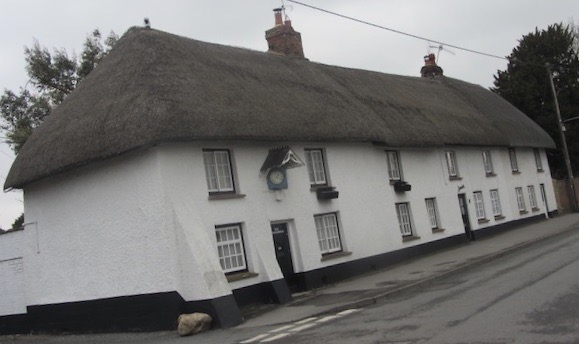 The house is at the junction of Old Post Office Lane and High St . This was originally a crossroads as the lane continued east up to Orchard Farm and Wexland Farm to the west.  There is a large flint stone outside it to protect the house from carts whizzing round the corner!  There are a couple of brick buttresses also supporting this ancient thatched house from collapse.

The front door of the house opened into a small hall. On the left was the doctor’s surgery.  Bear in mind that there was no piped water  supply or sanitation at  that  time!  On the right was the counter for the Post Office.  A   window at the rear became worn down we are told  with the telegraph boy jumping through  it.  In the corner to the right of the hearth was the telegraph exchange, boarded with tongue and groove boarding.  Next to it was, and still is, the post box.  Old photos show it on the outside.

We do not know when it opened.  Francis Leach was sub postmaster in 1867.

There is correspondence between the Postmaster General and the Treasury in 1887 relating to the  request  by  Sir Michael Hicks Beach MP, to connect the Post Office by telegraph to Salisbury, 12 miles away.  It was thought the accommodation might be too small.  Eventually it was deemed too expensive for the post office and the treasury paid.  Sir Michael was Chancellor of the Exchequer from 1885- 86 and 1895 -1902.

A new Post Office which opened around 1920 was built further down the High Street.