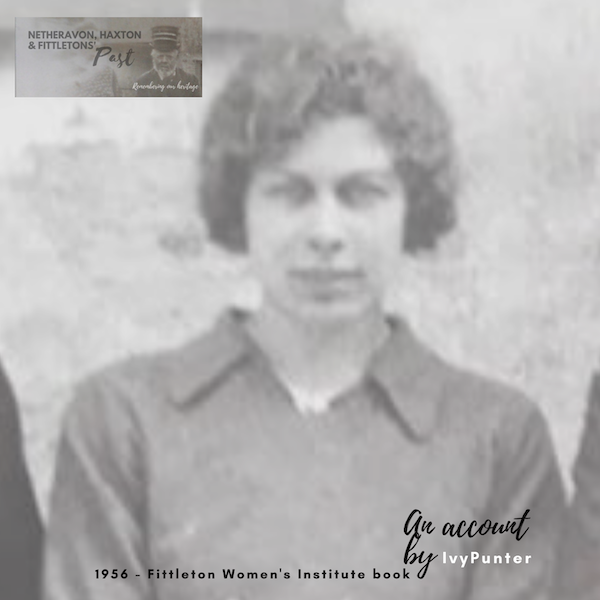 The account below is taken from the 1956 Fittleton Women’s Institute  book describing life on the local farms. It was hand written by Ivy Punter (nee Sheppard) who is  featured in one of our interviews from the 1980s. The minimum school leaving age was raised from 11 to 12  in 1899.

‘Years ago, men worked long hours on the farm for very low wages and no holidays! The farmer usually supplied the workers with skimmed milk and an occasional joint of beef, straw for the pigs and sometimes potatoes.
Boys and girls left school at eleven years old, boys would go on to do farm work and the girls would go into service. A boy starting this work had to sign an agreement with his employer for one year.
A typical agreement from around 1899 was the boy was to work ordinary farm hours but do anything he was called upon to do as carters boy at 4/- (four shillings) per week, to be paid fortnightly and at the next Michaelmas day he would receive the sum of 16/- for extra hours worked during the harvest. A junior ploughman would earn around 5/6d a week!
The farms connected to the village were each something in the region of 1,000 acres of arable land thus it was necessary to have many teams of horses and in some cases oxen for the tilling of the land and for sowing the seed. The last of the oxen for drawing ploughs in Fittleton was in 1906, up until that time, two oxen were used for a single plough and four for a double.
The shepherds were important people on the farm, when two or three flocks of sheep were kept as there was so much arable land.
The workers on the farm included the head carter and underlings, a groom and the cowman who would also look after the nags, the cows, fattening cattle, pigs and poultry.
Binding machines were in use by this time but grass and corn were often cut by hand with scythes and women would often follow behind tying up the corn and stooking it, this is when the sheaves are stood up on end in the field, this practice is still used today for thatching straw!
During school holidays, the women and children went into the fields and would gather up loose corn in a wheelbarrow, which would be stored in a shed until the father could knock it out with a flail and put it through the winnowing machine. This could be done at the Old Rectory farm barn, which stood on the site where “Pigeon Close” (now called Warren End) now stands.
The grain was then sent to a neighbouring mill to be ground into flour.’