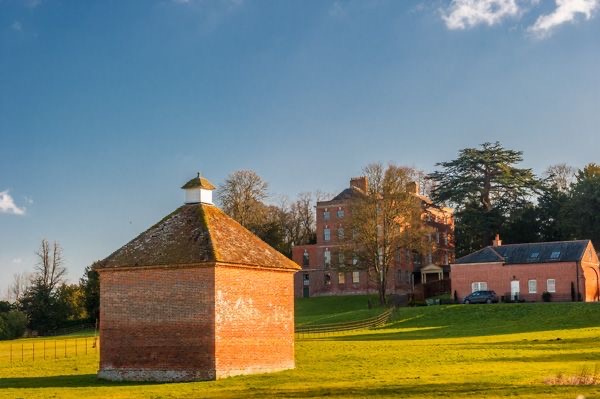 Netheravon dovecote stands 100 metres to the north west of Netheravon House and 60 metres west of the church, in the middle of a paddock. Although it is owned by English Heritage, access is very difficult as the field is privately owned. It dates to the mid C18th and is likely to have been part of the garden landscaped by Thomas Wright in 1760. Dovecotes were always positioned away from tall trees because they concealed the approach of sparrowhawks.  It is brick built, 22ft square, with a pyramidal roof and no windows.  The door has been widened and the internal ladder removed as it has been used as a shelter for horses.

Inside there were over 900 nesting holes made of chalk blocks with a limestone floor, now reduced to about 750. This is because of the enlargement of the doorway but mainly because of the arrival of the brown rat in the area during the C18th.  These rats (which were different to the smaller black rats) caused huge damage in dovecotes and so the lower layers of nesting holes were removed to protect the pigeons.

What was a dovecote for?

Dovecotes were built to provide their owners and their guests with the tender meat of young pigeons, called squabs. The birds were domesticated Rock Doves (more familiar now as feral pigeons), not to be confused with wood pigeons. The meat was much prized as a delicacy and was only eaten from Easter Sunday to November. Dovecotes are very much associated with a luxurious lifestyle. A game law of 1603 included pigeons among the birds which it was illegal to kill although farmers could employ bird scarers to drive them off.

Manure from the floor of the dovecote was spread on the fields and also collected by government agents to make saltpetre for gunpowder.

An older dovecote is recorded in 1634 at Newton Farm, now the site of the village school.  It is likely there was one in Fittleton near the Manor House and Rectory.

The Netheravon Dovecote is situated on private land and managed / looked after by English Heritage.  Unfortunately there is no public access.