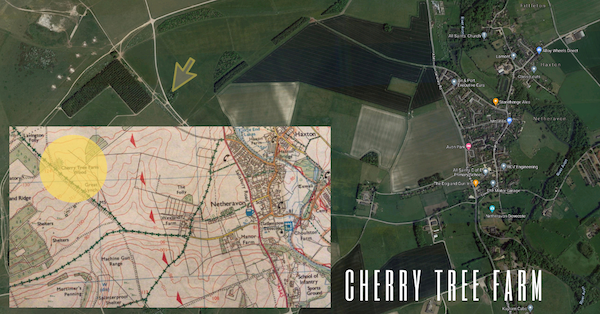 Cherry Tree Farm was not far up the old Devizes Road from Wexland Farm, easily walkable  from the village when the red flag (indicating military activity) is not flying.  Like Newfoundland Farm, it is still marked on modern Ordnance Survey maps even though there are no traces of buildings any more. There are  still cherry trees though. There was a dewpond, a source of water for stock made by craftsmen dewpond makers, several of whom lived at the lost village of Imber.  Rainwater was  collected and stored in them as there are no  summer streams on the downs (ie. only “winter bournes”).

Cherry Tree  was previously known also as Mr Pinniger’s Field Barn (see also Court Farm and Newton Farm for Pinniger). In 1881 a carter, George Dyke aged 41, and his large family lived there. His children were aged 14, 11, 9, 6, 5, 3 and 1.  Three were at school but probably expected to walk into the village like the other children of the downs.

Cherry Tree Farm could have  been  a small independent farm at  some  stage but so far we find no traces of that. Its dewpond would have been invaluable in sheep  rearing.