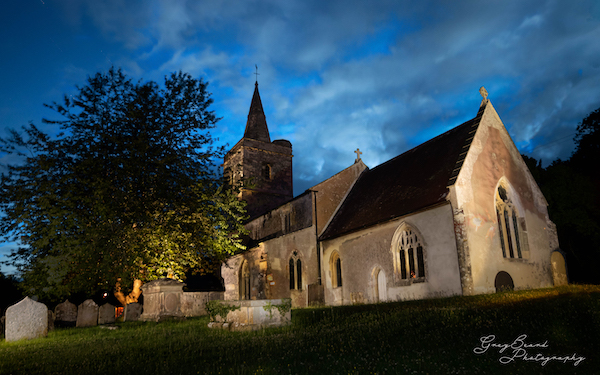 Both Fittleton and Netheravon churches are dedicated to “All Saints”, as are half the churches in the Avon Deanery.

Fittleton church, first mentioned in records of 1291, is built of flint and rubble, mostly rendered, and has a chancel, aisled nave and south porch.  The tower has a spire with a cockerel on top. The earliest identifiable parts of the building, the chancel arch and the bowl of the font, date to the early 13th Century.

The church has always been closely linked with the ownership of the manor and the right to appoint the clergy (the advowson) has been conveyed alongside it.  In 1721 it was sold to Magdalen College, Oxford, and in 1947 transferred to the Bishop of Salisbury.  The college provided a number of Rectors of the parish. (A Rector is in charge of a self-supporting parish; a vicar is in charge of a parish supported financially from the outside, as with Netheravon).

There have been alterations to the church over the years partly due to changes in religious rites, enlargements, and new windows being inserted.   Magdalen College paid for repairs to the church and a new window in the north aisle in 1841 and in 1857 two windows from the College Chapel were given to the Rector Thomas Pearse, a fellow of Magdalen, and inserted in the west wall of the tower. Pearse paid for the restoration of the nave in 1878. His widow, together with the college, paid for further restoration in 1903 (and see the bells below). The architect then was C.E. Ponting of Marlborough who restored many churches in the area, including Netheravon.

The bells of Fittleton have been expertly rung by local teams for hundreds of years.  Alan Cook has been ringing for over half a century.

In 1553 there were three bells and by 1903 there were five with a treble added that year.

Inscriptions on the bells:

Links with the School

At the close of the 18th century half the parishes in  England  had a charity school, usually connected with religious institutions.

Three bequests for education in Fittleton were made in the early18th century. Henry Clark (d. 1712) directed that from the annual rent of £12 charged by his will upon his farm at Haxton, £5 should be spent on teaching ten poor children to read and write.  It was noted in the parish records that  his coffin was  lined  with  velvet. He also allotted 10s. of it to buy books. Soon afterwards Elizabeth Buckenham, widow of the rector John Buckenham (d. 1689), bequeathed £50 to be invested and the interest used to teach children to read. Elizabeth’s executors gave the money to ‘Mr. Beach’ in 1718, and annual payments were thenceforth made by the Beach family for teaching four or five girls.

There are memorials on the church walls which record charitable gifts to the parish and remember various members of the gentry and clergy.

The lectern serves as the village war memorial and there is information about the loss of HMS Fittleton – see separate article.

There is a list of Rectors dating from 1297.  There were some colourful characters.

A memorial on the south wall of the chancel to Anne Jeay (d. 1612), wife of Thomas Jeay who was Rector and Lord of the Manor, and mother of eleven children, begins ‘The joy of Jeaye is gone from world’s woe To heavenly Joy and happie rest’.

A former Rector  of Fittleton, John Buckenham  and  his  wife Elizabeth are  buried in front of the altar.

Canon Robert Finch who wrote a history of the village in 1967 mentions this from the reign of Henry VIII:

“On the 4th August 1540, the Rector of Fittleton, William Bryde who was (Vicar of Bradford and Chaplain to Lord Hungerford) and six others  were drawn from the Tower  to Tyburn, and there hanged, beheaded and quartered, and their  quarters with their  heads were set up about the City”.

William Bryde (or Bird) and many others had kept to the old Catholic religion and died for it.

Canon Finch and his wife, who lived previously in South Africa, are buried in the churchyard near the church they loved.

The Rectors were entitled to an income from tithes, one tenth of the income of the parishioners. It came to be a much resented tax, particularly in years of bad harvests.  Given in kind, the produce was stored in the tithe barn, demolished soon after 1898 when the War Department acquired most of the village. The Rectors also had income from land, called glebe land. In 1629 the glebe measured about 45 acres and the Rector was also allowed to keep animals on the common pasture including 80 sheep.  Tithes were commuted to a money payment in 1840.

The land still known as Parson’s Hedge lies to the north of the track going east on to the downs called  the Drove.

Now known as Fittleton House, the old Rectory is next to the church. What we see today incorporates part of an earlier house dating to the C17th.  It was rebuilt in classical style in 1742 by Thomas Merchant, the first Fellow of Magdalen College to be Rector. His initials and those of his wife are incised above the main doorway.  It was later extended by Rev Thomas Phillips 1842 – 54, another Fellow of Magdalen.

The house became a private residence in 1953 when the benefice joined with Netheravon.

Fittleton retains its charm as a traditional Wiltshire village even though its has lost many cottages and there are some new houses.  Much of the reason for this lies in the closeness of the church, rectory and manor house (previously known as Fittleton Farm), surrounded by timber framed buildings.

Haxton was larger and more prosperous than Fittleton in the middle ages and still had a larger population at the time of the 1811 census.  Haxton had its own free chapel, meaning that it was not dependent on the church at Fittleton and had its own priest supported by tithes and glebe land.

The chapel was dissolved in the reign of Edward VI in 1547 and its income taken by the King.  The priest, John Blyth, was granted a small pension of £3.5 shillings a year.

So there is documentary evidence but no trace of a building. In 1718 it is recorded that it stood in “Ye orchard now in the possession of William Pierce, and had a house and barn belonging to it, and half an acre of glebe land lying in the Berry” which is described as the meadow lying on the west and south sides of Fittleton church.