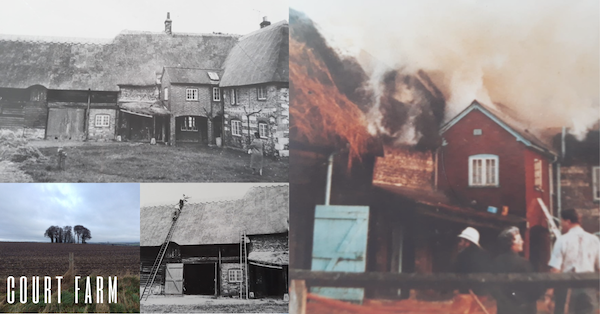 Court Farm House was a fine large thatched house with barn attached  and situated at  the corner of High Street and Court Farm Road, opposite the grocery store (London House). It was destroyed by fire in 1971.

The house was L shaped of cob and flint with bands of clunch (chalk blocks) at  the rear. The High St elevation had a Victorian brick frontage with two bay windows; the large thatched barn was in the local style with horizontal wooden cladding. Many acres of wheat would have been  grown to thatch and re-thatch the house and barn.  There was a carefully tended walled garden and orchard further up Court Farm Road. In the mid C20th there was what seemed to be a rough paddock immediately to the rear of Court Farm House  but no sign of any farm buildings except  the large adjoining barn. Photos taken during the fire show these features.   In the 1950s there were MOD workshops alongside the north side of the track which is now Court Farm Rd.

As far as  we  can  see Court Farm was the grandest house within the village during the C18th and C19th, lived in  by “gentleman farmers”. The attached brick bathroom at  the rear is  a late C19th addition, possibly the only bathroom in the village

The area around the house is of interest and is referred to in records as “a piece of land  called  the court”.  This name is now attached only to the pasture behind the village shop, Baptist graveyard and Working Men’s Club, going down to the river.  Its origins are likely to lie in the location of a medieval manorial court and many villages have a “Court Farm”. There were several manorial  jurisdictions within the parish of Netheravon which by the early C19th were gradually amalgamated into the ownership of the Hicks Beach family. Manorial courts were largely concerned  with land  disputes and the administration of the common fields.  This court was possibly connected to the manor of Netheravon with Haxton. The location of The Court, and the farm house, is also worth noting as it is in an elevated position which would not flood, yet not far from the river crossing to Haxton and the mills.

Some of the land on the High St side of the farm house was leased for housing  from about 1738, indicating an increase  in the population of the village and changes in the local economy.  The detached thatched cottage facing down the street could date from this time and indicates a village “square” developing, where shops too appeared.

There was a Parliamentary Enclosure Act in 1790. Enclosure meant  that the system of common cultivated fields (in strips), meadows and grazing land was ended. Unless an occupier had documentary evidence to prove the land  was  his he lost  it,  and the land was  divided into more compact  farms.  A new class of landless labourers appeared and the economy of England was changed for ever. It is likely that Court Farm took its name then from the Court ground.

The fire removed a large section of street frontage which has  been re-developed into housing.  The  estate which started in 1926 with the “New Buildings” (Thorne Rd, Piggott Close) constructed by the War Department to re-house villagers and civilian employees, was built on Court Farm fields.  At  least we have the name  to indicate an interesting history.

After enclosure in 1790 it is thought that George Munday was the first tenant of the large farm  with arable and sheep grazing on the Plain and pasture by the river, second in size (over 500 acres) only to Manor Farm.

In 1838 the occupier and leaseholder of Court Farm was Gifford Draper.  Some capital is required to take on such a lease and this family illustrates the rise in society of an aspiring yeoman farmer. Gifford Draper married Mary Harris of Fittleton in 1811, by licence (this meant that banns  did not have to be read and was more expensive). They lived at Urchfont  and their son Thomas was baptised there in 1814. Gifford’s occupation was noted as a gardener.  Somehow Gifford had links with Marylebone, Westminster and by the time of his death in 1841 had amassed considerable wealth.  His widow Mary and son Thomas continued the lease of the farm. In the same year of 1841 Thomas was married at Marylebone to Jane Lawes whose father was a “trader”. Of what sort we  do not know but it implies  some wealth, and married women could not hold property in their  own  right.  There  were no surviving children from this marriage and Jane  died in the 1850’s.  Thomas  married again in  1856 at Bulford to Thirza Pearce whose father William Pearce is noted as a “gentleman”. Again, a good  marriage  in social and financial terms.  In 1871, 16 men, 4 women and 4 boys were employed at Court Farm. Thomas Draper died in October 1875.

Lydia Smith, a widow, was farming at Newfoundland  in the 1850s and 60s but took a lease on some land at Court Farm in 1855:  “230 acres in Hill or  Old  Field,  Lower Field, and pasture in the parklands in Netheravon”. Then Thomas Draper took a lease of Comptons (Newtons) Farm and Court Farm in 1862.  We have no explanation for  this yet and Lydia Smith does not appear in census returns, only in local directories.

In 1876  a lease was granted for both Court Farm and Comptons (Newtons) Farm  to Edward Pinninger. The Pinningers held lands in several parishes and it seems  that the Hicks Beach agents were having difficulty in leasing land in this time of developing agricultural depression.  It is probable that  the farm buildings at Comptons Farm were  being  used as a base for both farms at  this  time because of the expansion of the village  near Court Farm House.  This is the site of what later was called Mill Farm and is now the Primary School. Some of the chalk boundary walls  remain. The main entrance was from Old Post Office Lane.

The Stidstons at Court Farm

Court Farm, with Comptons farm,  was last tenanted  by  members of the Stidston family. Brothers Charles (1863 – 1944) and John Stidston were  there from  at least 1887.  Charles and his wife Annie married in 1891 and had four children born in Netheravon.  They were a prosperous farming family and always had at least two resident servants. But by the time of the 1901 census Court Farm House was empty and both brothers were farming elsewhere. Court Farm lost most of its land for military training when the Hicks Beachs sold the estates in 1898 and was no longer viable. The remaining land was divided amongst other farmers and the house was let separately.

In spite of being  them being there a relatively short  time the Stidston  name lived on. Court Farm Beake was mentioned in the 1901 census as “Mr Stidston’s”. Stidston’s folly (see photo) is the clump of trees reached up Stidston’s Hill which is a continuation of Mill Road westwards onto the Plain.